My mother: The Curly Haired Twat. I know what you’re thinking – you can’t slag off your own mum, especially not on Mother’s Day. But if you’ll only give me a chance, I think I can explain.

She was called a curly haired twat by a riled service user when she was working as a Social Worker. Stifling laughter all the way back to her car, she thought to herself; I like that woman. I mean, just imagine it - a well-meaning social worker with a mane of curly hair and linen trousers attempting to give some lady life advice in her own home. In that moment, she kind of was a curly haired twat - at least to someone. A curly haired twat who was just doing her job (probably doing a great job, knowing her) but a curly haired twat all the same. What magnificent use of visual language - not deeply hurtful, not heavy-handed, not just a lazy one word-er. I’ve never met the woman who hurled artful abuse at my lovely mum, but if I did, I would like to shake her hand.

“You a dirty mistreater, a robber and a cheater / Stick you in a dozens and yo pappy is yo cousin / And yo mama do the lawdylawd” sang Speckled Red, the raucous, blues-singing, piano-thrashing powerhouse, in 1929 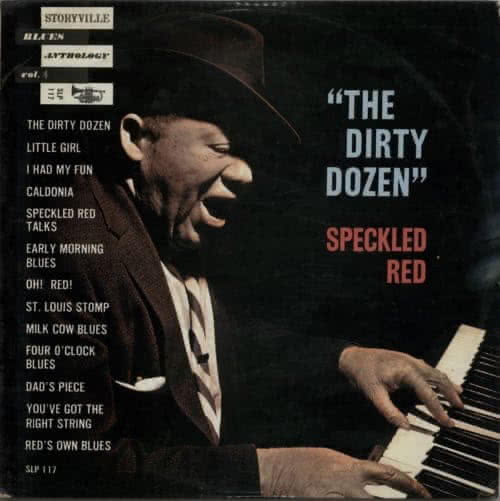 . His early ‘yo mama’ lyrics told of old bluesmen, of inside jokes, and of The Dozens; a game of witty exchanges as verbal insults, considered to be a long-standing part of African-American culture. These scattered performances, alluding to the creative value of comedic insults, influence culture to this day. The drag queen Bianca Del Rio can offer any one of you brave takers a personalised YouTube insult video as part of her Bianca Hates You series. The season 6 winner of RuPaul’s drag race is celebrated for the poetry of her put-downs, which include such gold as “She looks like she walked into Claire’s, fell on the accessories rack, and said ‘Ill take it!’” Bianca has been spotted dressed to the nines next to an Insults $1 sign on sidewalks across America.

The visual potential of insults has interested me ever since I saw a 1992 photograph of Bikini Kill’s Kathleen Hanna with SLUT written across her stomach. Clad in a Swizzles Love hearts themed bra, Kathleen’s ownership of a word historically used to oppress her gave personal power to insults, taking them out of their original discriminative context 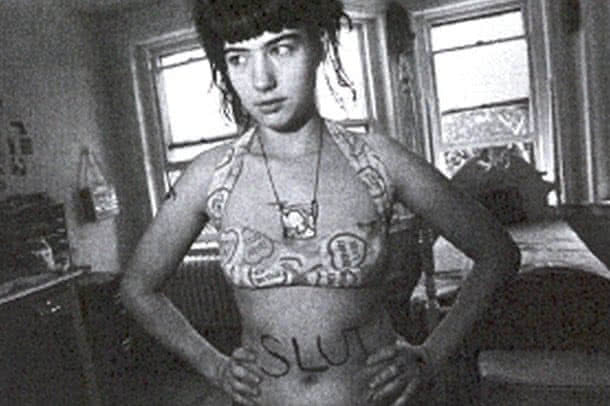 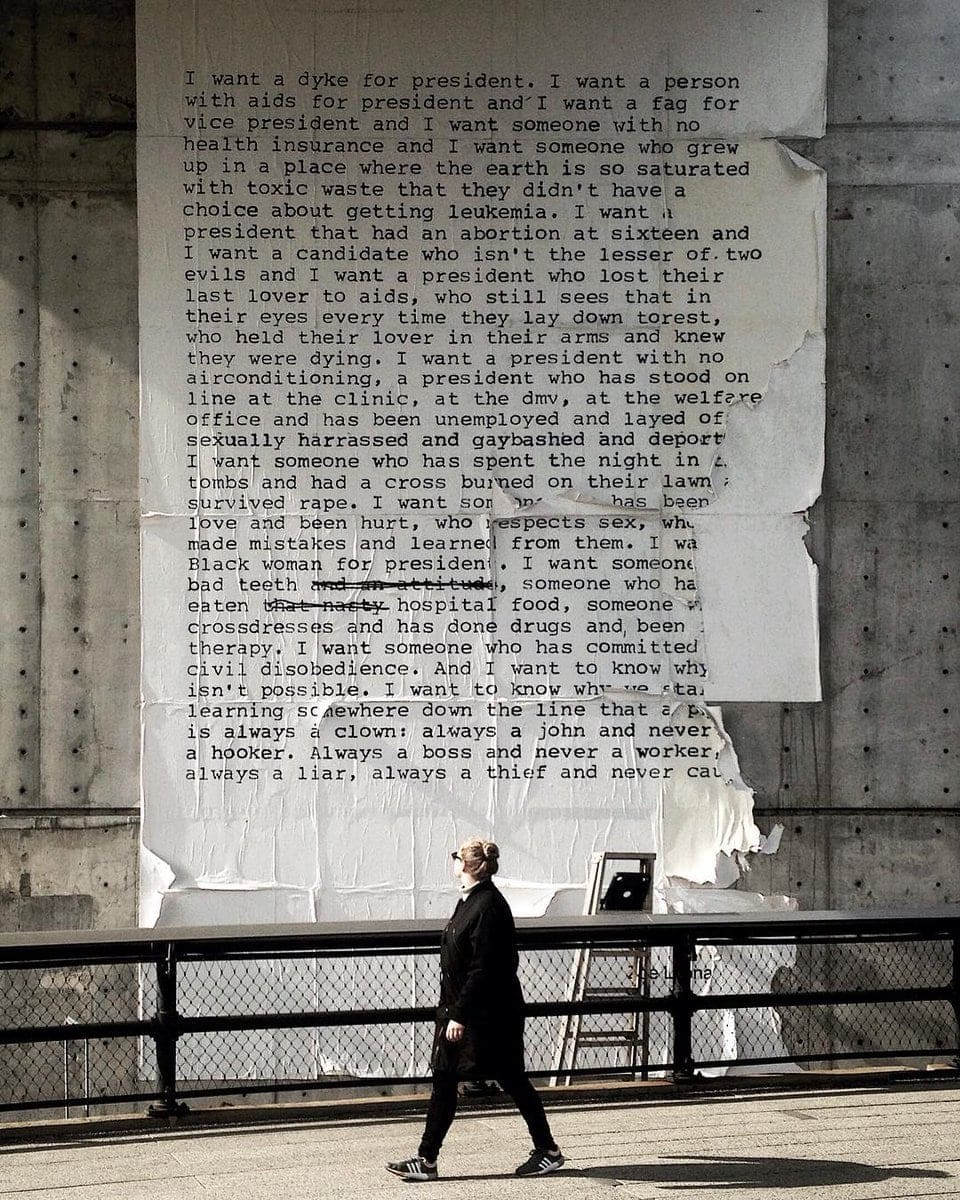 . The display of her words, laced with the vulgar jibes and profanities that history chose to drag along with it, gives much needed recognition to the everyday people who have had to hear these slights their whole lives. Who have faced the toughest obstacles, and had the least say in how things got to play out.

Insults are too often expressions of the very worst side of humanity. A harsh reminder of this came on International Women’s Day last Thursday, when SNP’s Mhairi Black read out a series of misogynistic insults she has received on twitter; “..a rug muncher, a slut, a whore, a scruffy bint. I’ve been told you can’t put lipstick on a pig, let the dirty bitch each shit and die.” Abuse like this has no comedic or artistic value, because it comes from an affection graveyard. Without compassion, however deep deep down it may be, insults – like anything, I guess – lose all their art. The Dozens was played for years among people from the same communities – brimming with fondness in insult disguises. In a similar way, it is most likely those people we find ourselves screaming YOU WANKER at in the middle of the night, eyes filled with tears, who are the people we love the most. Not the ones who casually write us pathetic rape threats behind dusty computer screens, eyes filled with fuck all.

Affectionate insults are at their best when the self-deprecating put-downs we give ourselves are used against us to express love. Just as Newcastle United fans did when, after Alan Shearer tried to remind everyone he was “only a sheet metal-worker’s son from Newcastle”, they held a banner from the stadium, insisting “You’re not just a sheet metal worker’s son from Gosforth. You’re a legend 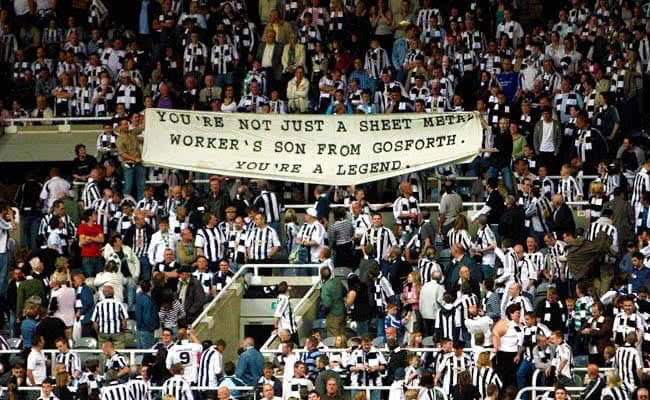 .” The Artist Keith Arnatt literally frames the relationship between insults and affection in his early 90s project Notes from Jo; an enlarged series of Post-It notes from his wife, found around the house after her tragic death. “WHERE ARE MY WELLINGTONS YOU FART” 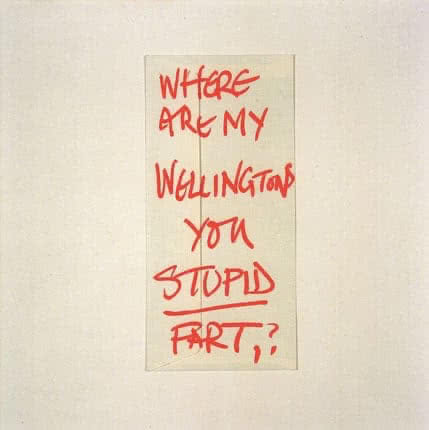 “YOU BASTARD! YOU ATE THE LAST OF MY CRACKERS!” 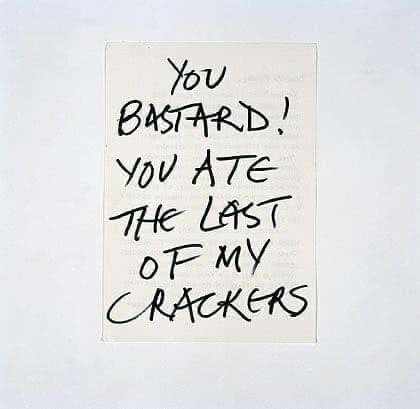 “I SPENT LOOKING FOR THESE. PIG. THEY WERE IN YOUR COAT POCKET 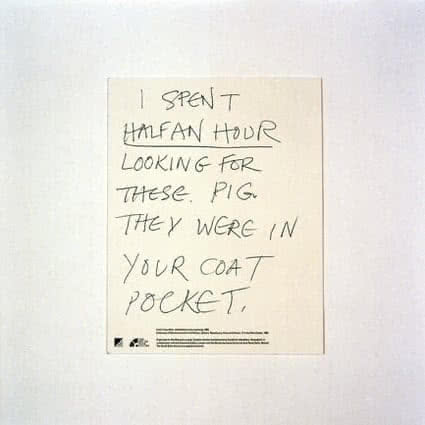 .” We see through Jo’s words how our vulgarities – those scuff marks engrained in the character of a person – are often what we love most about them, as opposed to the otherwise day to day niceties used to navigate worlds of strangers.

My mum would work with the woman who insulted her years later, and the two would laugh together about the perfect three words that ended their first meeting. So, here’s to the dirty mistreaters. The beauty school drop outs. Anyone who’s ever eaten that nasty hospital food. The scumbags, the maggots. The stupid farts. Every sheet metal worker’s son from Gosforth. For the insults that outsmart, that empower, that make us laugh, that show us character, are the ones that remind us that we have messed up or been messed around - but that we belong anyway. Here’s to my mother: the curly haired twat.

Tenaya is a visual artist telling (usually true but sometimes made up) stories about everyday people.