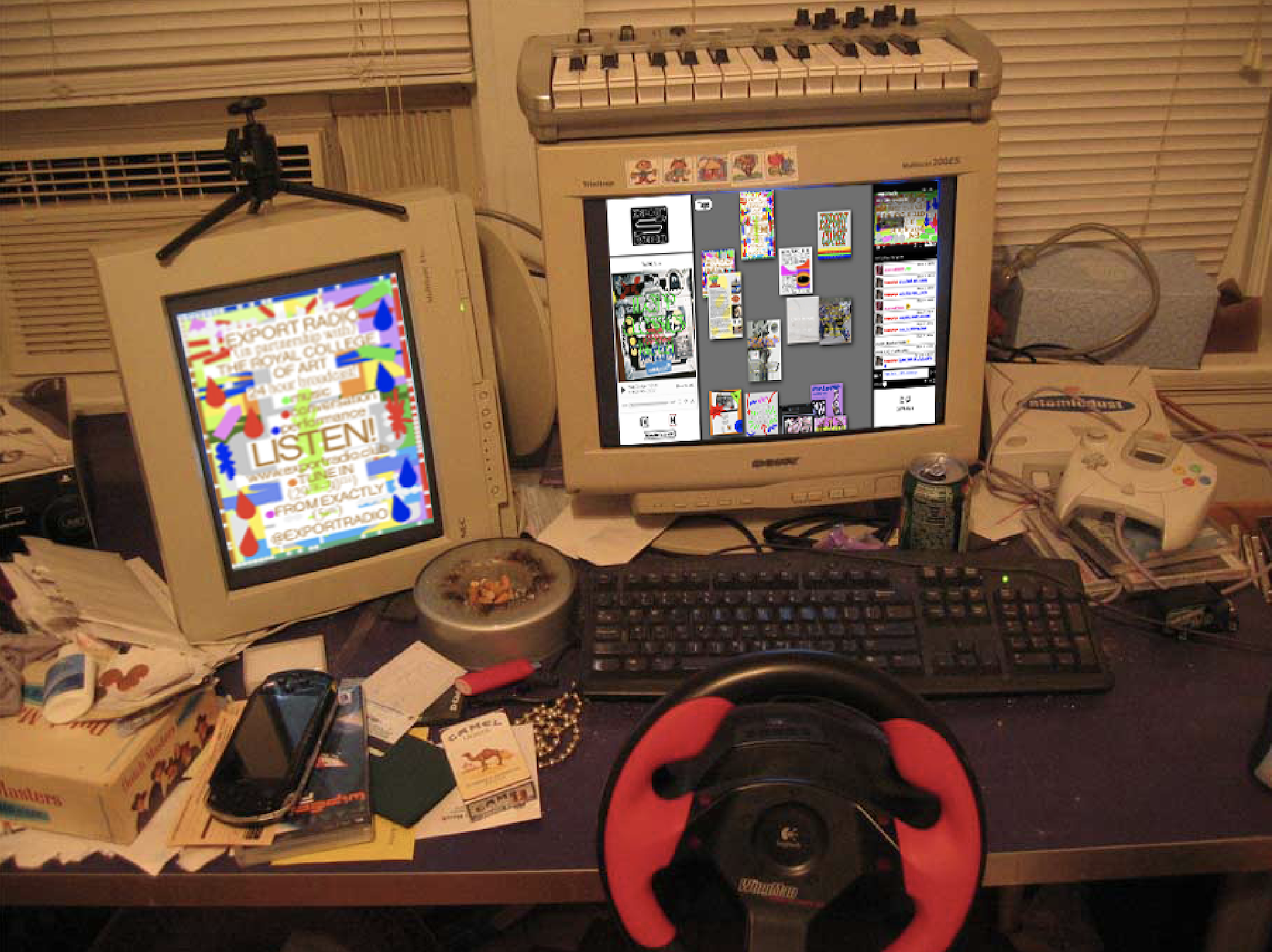 January 2021 was a huge leap in practice for Export Radio. With WiP2021 coming at the latter end of the month, and the production of the Export Radio website coming to a conclusion, the three of us involved in the station had to play to our strengths in order to not :

a) lose our minds
b) compromise (something Louise and I swore to NEVER do.)

Instead of making individual shows in January, we put all of our energy into the WiP show. The decision we came to was the creation of a 24-hour broadcast. The idea was presented to me by Louise when we were back in Ridley Road Social Club. Bottom-line, the idea sounded mad but seeing as we were in the midst of a live broadcast (Match-Point) I got excited and said “Bring it on!” I could feel that the broadcast followed the Export guidelines : conversation, collaboration, international inclusion and the chance for us to add to our initial idea, of the perennial archive for the class of 2021. After an enjoyable Christmas break, we were all thrown into lockdown. Carmo stayed in London, I went to my family home in Warwickshire, and Louise returned to France. Due to the thick skin we’d gained by partaking (and winning!) the Varley award all through ZOOM, we didn’t find this roadblock much of an issue.

The creation of the website also came into reality, as we revealed it just a week or so ahead of the WiP show. The site was designed by myself, and was coded and given life by Max Kohler, Rocco Punghellini and Lola Li. Without them our net-archive wouldn’t be in any shape or form at the level of quality that we would hope for. The site acts as a way to promote the show within our own world, without the reliance of using twitch hyperlinks or any external source of exposure. The website is our little planet which contains all of our previous shows, the images used as well as a chat box for people to drop by and say a few words as they listen to a show live, or in post.

The Varley award money was put to good use, and we paid the designers a generous chunk, as it’s good practice for young creatives to help out their friends, especially if all parties involved are both passionate and excited about the creative process. Ideally, the meetings about the website would’ve been talked about in a pub or bar, more specifically in Elephant Bar West (who remembers Thirsty Thursdays?), but alas, the meeting process was all done with online sites like Miro, Basecamp and of course Email.

As the process of building and publishing the site was coming to a close, we defined our relevant roles within the creation of the 24-hour show. Carmo is naturally a scheduling wizard (as she is with emails too), so she took care of the majority of these areas. Next up, Louise headed the points of outreach and press. My role (Dougal) was to lead the graphic design process, providing posters, banners and other bits and bobs.

Frequent messages between WhatsApp were a frequent occurrence (hundreds a day). We got used to the web-notifications fast. Louise was busy finding RCA initiatives from all corners of the school. Carmo was responding to emails regarding open-call graphics which I was generating. It was all so exciting. I liked feeling part of a well-oiled machine. Coming to the end of the outreach process meant more visuals. We had to create an overflow show, as we had too many DJ’s. This became a scheduled ‘afterparty’ which would happen a week on from the main show.

We also hit 500 followers on the ‘gram, which was supported by frequent, daily posts showcasing the musicians, events and artists featured during the 24-hour schedule. A few days until the event, and stuff fell into place. With our personal tutorials, assessment and personal pages (for the main WiP2021 show) finalised and out of the way, we were ready for broadcast. This is how it went down. I would host the stream from its start at 5pm on the 29th, hosting a showcase from WHITE NOISE RCA, as well as a roundtable with other art-school radios (thanks to No Touch Tunes, Mushroom Radio, Good Times Bad Times, idididid radio) until the early hours of the morning with a myriad of music and DJ sets to stop me from going to sleep. Carmo would then take the lead (as I crashed out hard in bed) to lead us through the morning of conversations and discussions, most notably our new frequent collaborators of ‘SCRAWL’ (Writing MA.) At 9am, Louise would cover the final stretch, and host more discussion and round tables, with an Export favourite being the Fashion MA broadcast. It really blew us away.

Admittedly, we only had one hiccup. The sound on Louise’s side didn’t work (due to some awful OBS bug), which I found out by receiving a more than welcomed call from WhatsApp at 9am, and in my exhausted state, I feared the need to stream from 9am-5pm, but the nightmare didn’t come to fruition, and Louise sorted it out. Phew.

And with that it was done. We’d actually done it. The three of us had managed to pull off a collaborative act of over 100 people, from across the world. We reached 2,300+ people as a result. With backing from all of our supporters, the RCA and close family and friends, we’d managed to document a perfect example of collaboration during unprecedented times. High fives all around.

Thanks Louise and Carmo. If it wasn’t for you I’d have no idea what to write. This project has helped define (to me) what it means to collaborate, and what it ultimately means to play to your strengths. The point of group work is to define roles and play to them, and I feel we couldn’t have done any better.

Dougal is the Co-Creator of Export Radio. He’s also studying ExComm at the RCA, He likes to run.