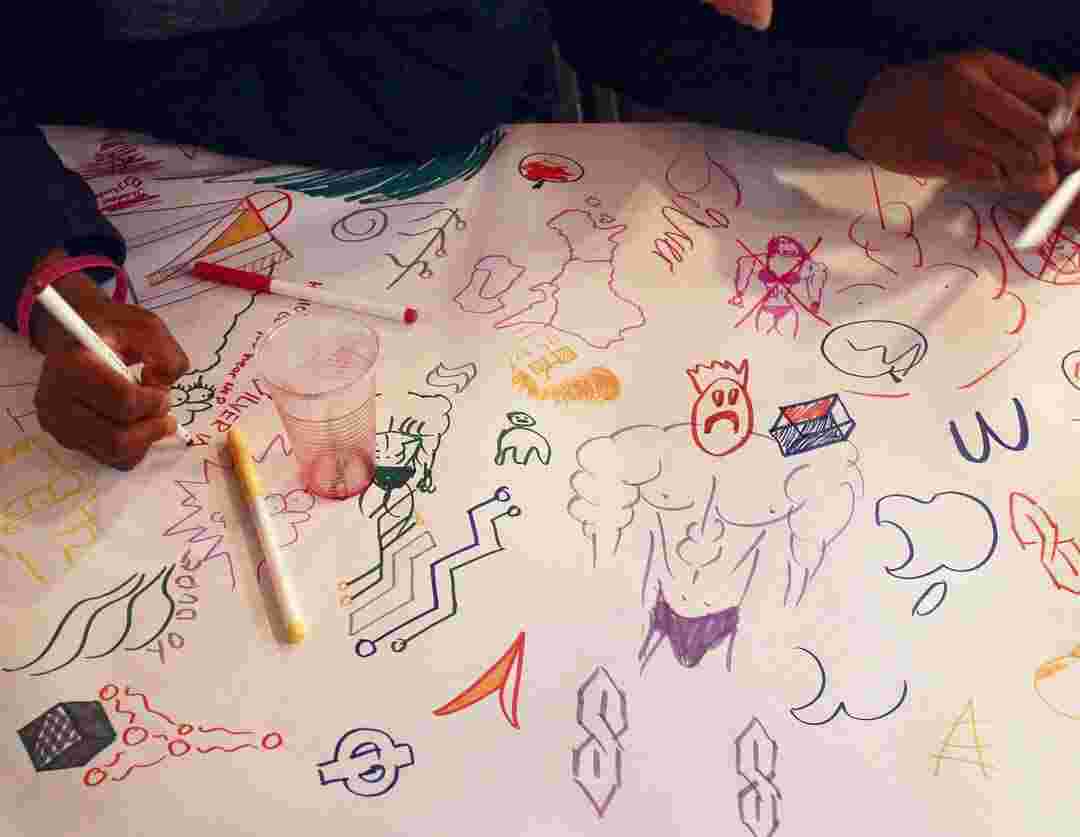 Foodstuff by Design Without

Our event for Design Without went through multiple different forms in a very short period of time before finally becoming ‘Foodstuff’. One thing was certain throughout the entire process leading right up to the final hour that this was explicitly not about us and was not a showcase of our work. This was an opportunity for us to introduce ourselves at the RCA to the White City community, and vice versa. We wanted to let people know that in and amongst the BBC offices, Starbucks and that giant gross wine bar, there was an art school called the RCA that actually wanted to be a part of the wider pre-existing community in and around W12.

In the short run up to ‘Foodstuff’, we knew only that we were having our event at the White City Community Centre, and that it wasn’t going to be a conventional exhibition. Firstly, we contacted the centre and they notified us about a weekly coffee morning attended by local residents. We went to this and met with people who’d been living on the White City housing estate for most of their lives. People exchanged stories about the BBC, expressed their passion and support for Queens Park Rangers, spoke about the effect Westfield had had on the area and drank some pretty weak coffee, but the morning proved to be a success in giving us an deeper understanding of the history of White City. What was interesting was the that most people had no idea the RCA had just moved opposite, fewer even knowing actually ‘what’ the RCA was. This was a great starting point for us. 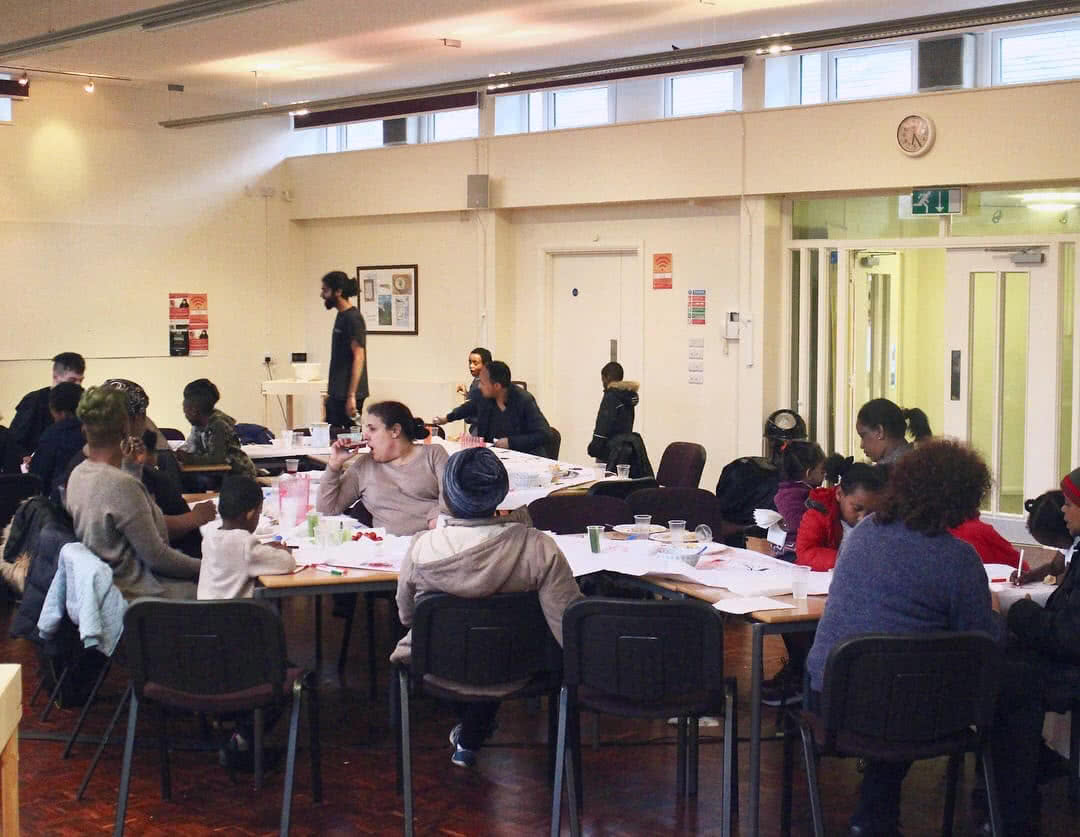 One guy mentioned that an art class that had taken place at the Centre not too long before. “Only 4 people turned up!” he said. What was so disheartening about this was not so much the logistics or the structure of the event – it had been giving adequate funding, time and management – what was disheartening about the art class was the general sense of apathy and nonchalance. No one had bothered to turn up, and those who did were equally as unbothered towards the overall non-attendance. This seemed to be a running theme at the Centre. An event is scheduled with a small amount of funding, mainly from the council, no one shows, so the next event is underfunded because of the previous no-shows. This loop continues. Pretty sad. It’s like that snake that eats it’s own tail – Ouroboros.

Something super interesting did crop up though. An event was mentioned, an event that had taken place a few years prior. A food-centric event. People bought food, people made food and people ate food, all within the main space of the Community Centre. Of interesting note here was the high turnout for the event. Not only did many people come, but many people came with their own food prepared to share. People bought dishes inspired by their home countries and this started conversations between different sectors of the community.

So, we stuck around and spoke for a bit longer and continued to drink our weak coffee. It was here that the trail ran deeper, it led us to a second event, one held at the dishevelled building east of the Community Centre. So the following Friday evening we went along unannounced, not knowing what to expect, to this event that was overseen by the local priest. He seemed genuinely passionate about both the community facilities and the residents living in White City. He spoke about how the White City community had a real engaged spirit and that his Sunday services were both well attended and demographically diverse.

We now knew that we wanted to get people talking, get chance encounters happening and get things moving forward. We thought about how food can bring people together as it had bought our elective group together in the past, and how this reflected previous events that had occurred at the Centre. We wanted the actual food to take a backseat though, to be merely the backend. The frontend is people talking – communicating. 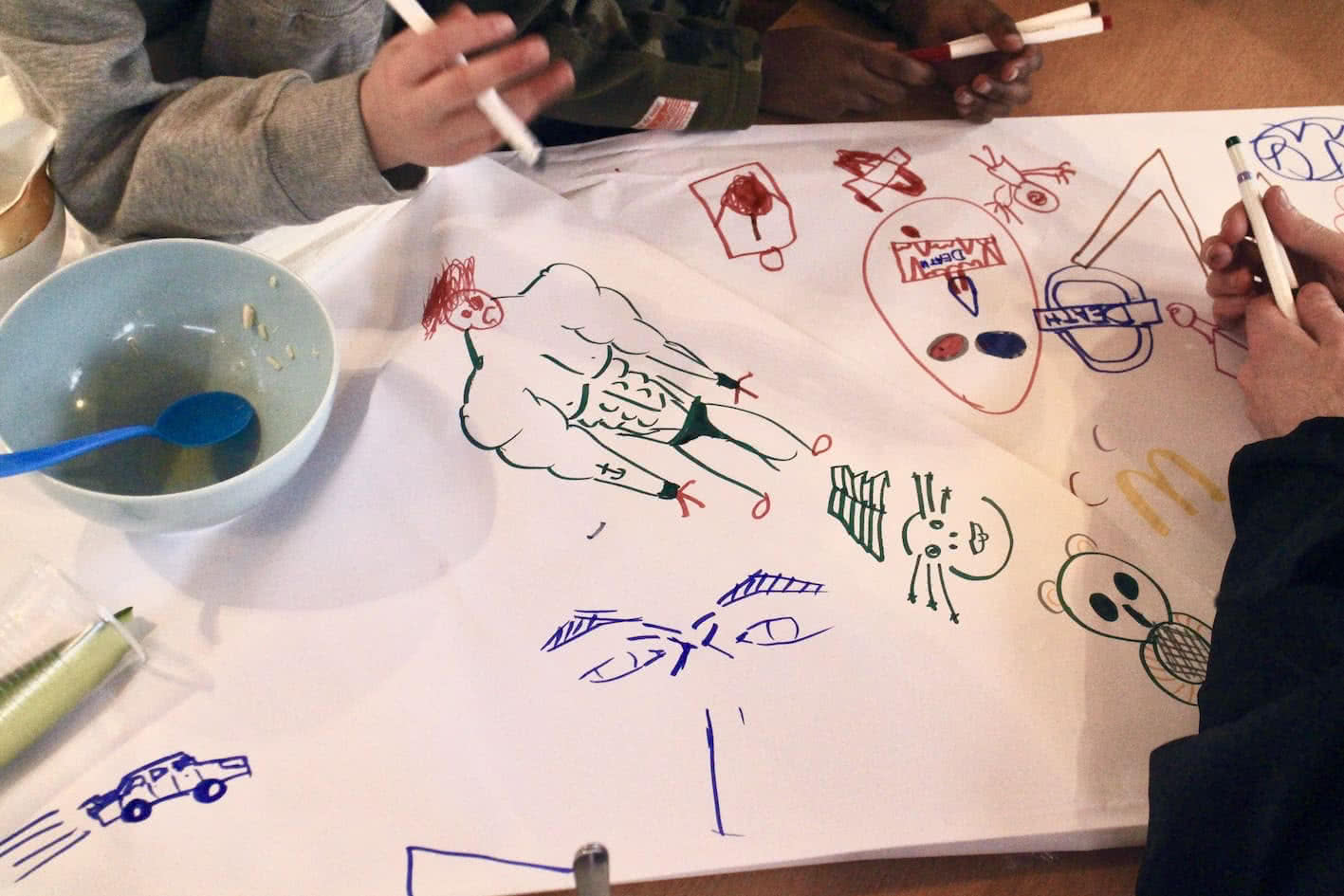 The most important factor in the build up to the event was an awareness of how were handling every aspect of Foodstuff. Predominantly middle-class white kids enrolled at some fancy art school in West London entering a space that is almost entirely made up of the opposite of that demographic requires maturity, respect and understanding. We were adamant that we didn’t want this project to be disingenuous in anyway, especially in a post-Grenfell London. We took care that every action was sincere, optimistic and considered. Sometimes this meant removing, or ‘un-designing’ certain elements in order to make the project more democratic, open and most importantly – fun.

People ate food and young people drew. People came in from the rain and elderly people spoke. The event had a real communal feel to it, and the pouring rain outside seemed only to help in creating a sense of closeness and warmth. The younger kids seemed to be fascinated by some sound elements we had installed – reverberations from speakers linked to mics sonically bouncing around the community centre hall. We made food specific to ourselves and where we were from in the world, utilising the diverse backgrounds we have within our elective group. We spoke to people we had seen previously at the coffee morning and through handing out flyers on the estate, and met some new faces from the church and local food bank. The careful consideration of all the physical elements allowed us to create something where people felt comfortable, and details were not left unnoticed.

We believed that by considering all these little details, even if only for a minute, that that one minute spent gives the details a certain artistic weight, if only a little weight. This we think is the work. This is the heavy lifting. Food is merely a catalyst for modes of exchange, dialogue, laughing, romance and encounter.

Design Without presents a fast-paced series of obstacles, precipitating a continuous need to shift actions and attitude, challenging the designer’s relationship to purpose, function and client. Design Without is an interdisciplinary space that embraces risk-taking, failure and radical experimentation to explore new boundaries of visual communication, the intersection with other kinds of creative practice and how such ways of making (and thinking) can contribute to positively changing the world around us. The provocations set by tutors in Design Without demand a response from each participant as an individual. Likewise, the form, media, mood and intention of the work are never predetermined. Initiated by Prof Neville Brody and Dr Cecilia Wee, riffing off the long-running elective Design Without Labels (established by Margaret Calvert).

Christopher is a Visual Communication student.