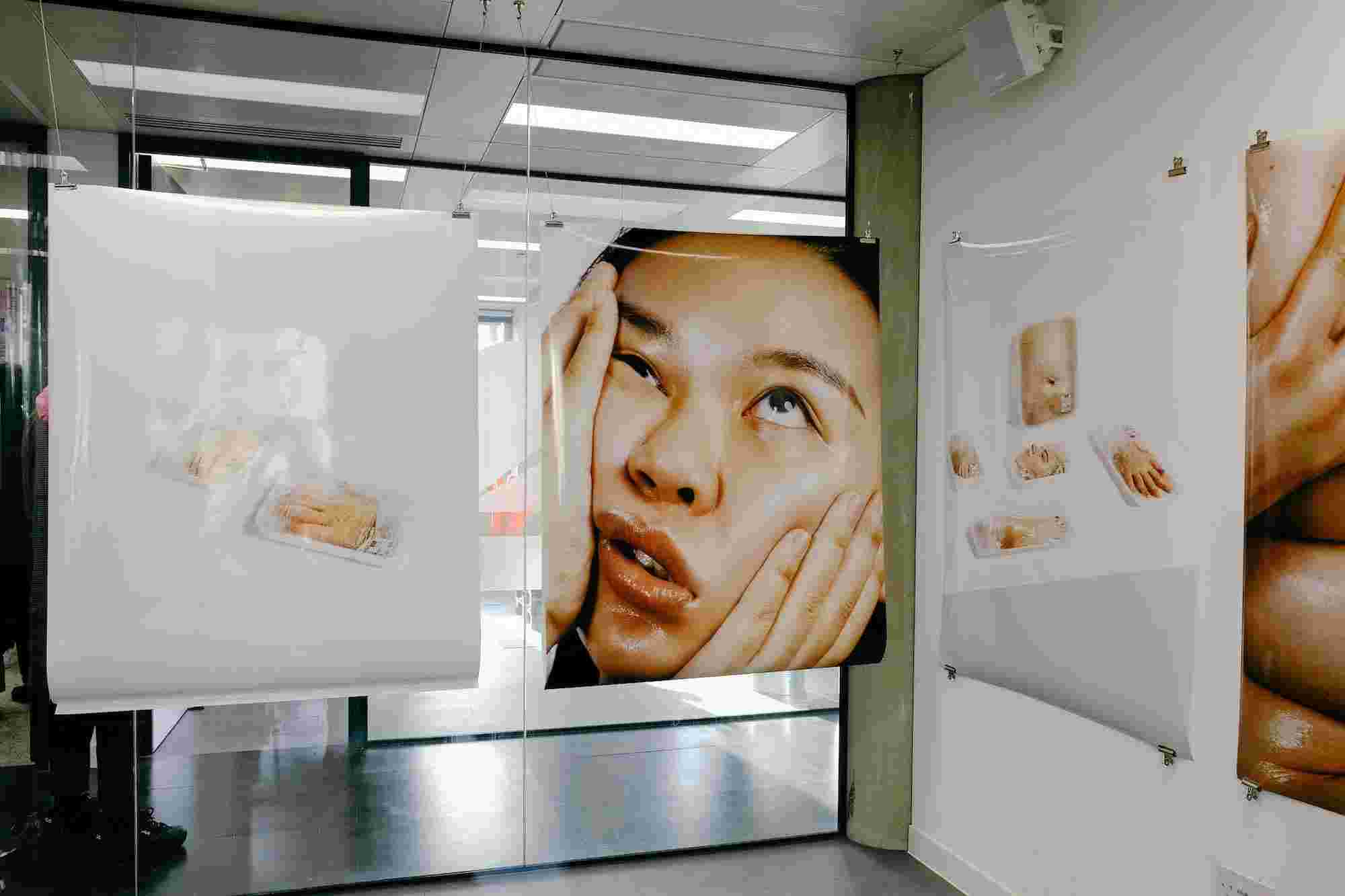 The WIP provides a space to gauge, question, ask, survey, prototype, fail, succeed, communicate, destroy. The show embodies the various cultures of each of the School of Communication (SoC) programs. Each to their own; the work manifests itself in various forms, spheres, themes, mediums. Yet, commonalities present themselves. This year, the most interesting motif that weaved throughout the work, was the response from students to their environment, both physically, socially, and conceptually.

We can observe these motifs through the movement, and position of practices in response to what was happening to students and the RCA on both the micro and macro level. For example, both Julia Mahrer and Al Leeming, the WIP show reps for Visual Communication, noted that during the 2018 show, a large portion of the work was evocative of the political and institutional implications of RCA’s recent move to White City.

In contrast, this year’s show covered a range of thematic elements, but strong presences delved into identity, self-care, self-awareness, or to put it another way, situating oneself in an environment. Julia noted that “this years WiP embraced experimentation as a challenge to create connections: connection to nature, wellbeing, somatic thinking, self-discovery and community through making and embodiment of the work.” These conversations position themselves as an interesting response to the highly politicized work of the previous year. This pattern illuminates the narrative of the RCA experience, through the voice of the student body. RCA’s public-facing narrative, as an institution, is often represented through the lens of administration, or brand. The WIP show provides a distinct portrayal of student’s relationship to the institution; their context and environment. The 2019 body of work suggests an interesting shift: though there may be some residual unrest about the recent move to White City, students are working with it. They are thinking, researching, questioning, pursuing. They are drawing parallels, congruences, contrasts. They are adapting. They are responding. They are building. These responses hold a specific power in demonstrating that despite the context, making will always hold currency. Our practices, though varied, carry a value that can not be deconstructed.

Whether directly or indirectly acknowledged, VisCom students have responded to their environments by making. This is, perhaps, a fundamental element of their practice, but one we may often overlook when characterising our work. Let us continue to adapt, build, respond, create. I look forward to seeing, and making the WIP show of 2020.

The Work in Progress (WIP) show is another opportunity for frenzy, stress and sleepless nights to come and grace us with their presence. A tender moment for people to either work together and discover each other’s work, or discover each other’s worst side, all at the same time. During the show, we spoke with students who lived through the process to better understand it. As first years, this will hopefully help us in preparation for next year’s show when we will have to dive into the frenzy, stressy craziness that show time can be.

During our conversations, the first thing that struck me was the different approaches that the different courses took to the show. On one hand, there were Animation students, they had an easygoing attitude, using the WIP show literally, as the title states, a work in progress. Their projects at the time were in the process of being developed and the show forced them to either take decisions in their work, get feedback or think about their presentation. Or all of the above.

An Animation student told me that, at first she was a bit annoyed to have to go through the process and felt like it was a waste of time but, by the time the show happened she could see the whole point of it all. She had had to make decisions and had gotten feedback on her work which would help her for the next stages of her work.

Unlike Animation, Information Experience Design (IED) were given the brief to find a research topic and develop it for the WIP show. From there, many different research questions emerged and data was collected. Different people were at varying stages and some were planning to continue and expand on their research for their final show, this stage being a prototype phase in this case. But, others were pretty far along in theirs and were planning to develop another project entirely for their final show.

Some Visual Communication (Vis Com) students, like IED, used the show to present prototypes while others used it to show finished projects. A few VisCom students used the context of the WIP show to run workshops and experiment with participatory work. Some noted that this approach made the process less stressful and enjoyable for them. Using the WIP show for its audience and taking advantage of the moment was, in their opinion, the way to go.

I think overall, whether in Animation, IED or VisCom the Work in Progress show is an opportunity. Like everything at the RCA, the WIP is there for you to grab and make it as you want it or need it. It can be a deadline, a crit or an inherent part of your project. Whether it’s there to advertise the school or really to showcase the students remains unclear. But, we should all take this opportunity and use it to help us in our practice.

Kat is a Y1 viscom student on the experimental pathway. Her practice explores both political and social content, in regards to the multifaceted influence of language, both in its written and spoken forms.

Betty is a Y1 viscom student on the graphic design pathway. Her practice usually revolves around collaboration and her interests lie in socially and environmentally engaged work.